Today in the cuisine demo we had chef Gilles and he was covering a few basic desserts: Eclairs filled with creme patisserie, sablé biscuits with fruits and cream and a vanilla bavarois with a red fruit salad.

The recipes were the same as we have used in pastisserie, though the amount of sugar that went into the eclair paste was not measured correctly and was much too high, making eclairs that were much too brown.

The bavarois was plated with raspberry coulis and a salad of strawberries, raspberries and redcurrants. 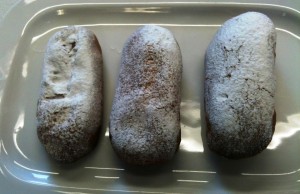 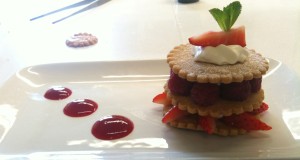 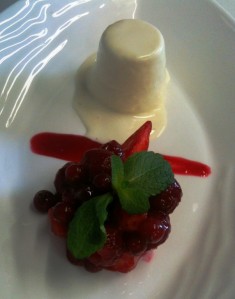 We then had a practical making the beef stroganoff and rice pilaf from last week. Quite a quick practical (we finished an hour early) as it all cooked quickly and it was very tasty indeed, but not nearly enough.

Lastly we had a patisserie demo with chef Nicolas, which was a pleasant surprise. He went very quickly in the demo, which was good as I couldn’t stand the constant noise at the back of the class from those who just can’t shut up for more than 1 minute. Considering how much money the course costs, I am amazed that people want to talk through it rather than paying attention and I wish they would shut up or go out to have their inane chats.

Anyway, some repetition of recipes today as the chef was making sablés too as well as almond meringues and orange tuiles.

The chef made the sablé paste (a shortbread like mix, rich in butter) and coloured half of it with cocoa powder. He then made a couple of different designs, one being a checkered pattern of the 2 doughs, the other a spiral. Slices of each were cut and baked.

The tuile mix contained orange juice, zest and grand marnier and nibbed almonds. It was piped in small circles, which, once baked, had spread out and were shaped into curves.

The almond meringues were made of whisked egg white into which sugar flour and ground almonds were folded. It was piped in baton, circle and oval shapes. The centre of the ovals was filled with almond cream. Once baked the small circles were joined together with jam. the batons spread with chocolate and the ovals topped with fondant.

All the petit fours were arranged on a silver tray for presentation. 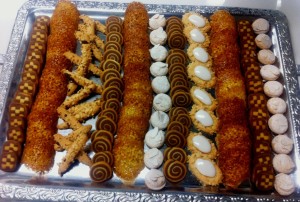