Today we had 2 practicals with a demo in between.

We started with cooking the lemon sole with chorizo crust demonstrated yesterday. The sauce is made from chopped small green crabs, brandy and a little cayenne and is very strong and rich. The frog’s legs garnish were breadcrumbed and fried and taste of nothing. If they were something with a wonderful flavour I could understand why we might cook them, but as they taste of nothing, I can’t see the point of spending so much time preparing and cooking something so tiny.

Next was a demo from chef Eric who cooked a couple of dishes.

The first was a soft-boiled egg, shelled and breadcrumbed in gingerbread crumbs, deep-fried in clarified butter and served with Bayonne ham and rocket with a red wine and shallot vinaigrette.

Next was a sea bream which was cooked whole in a salt crust.

The crust was opened, the fillets removed from the bones and served with avruga caviar, bok choy and chive oil.

Lastly we had another mystery basket.

We  were given a list of ingredients from which we had to create and cook a dish. I confited sea bream fillets in olive oil, made some parsley green pasta and served it with asparagus spears, broad beans, sprouting broccoli and a lime and olive oil vinaigrette with diced tomato.

Today in cuisine we had a lesson on risotto and pasta. Chef Eric took the demo, but without Chef Gilles.

He started by making the pasta. Special pasta flour, graded 00 and milled very fine, is used to make pasta. Add a little salt, an egg, an egg yolk and a little water, if needed, mix, knead it and you have pasta. Needs resting, wrapped, in the fridge for 20 minutes.

Once rested, it was rolled out using a pasta machine and put through the linguine cutter. Then onto a tray to dry out a little.

Meanwhile the sauce was made. Some chicken stock was brought to a boil with some cracked black peppercorns to infuse. Creme fraiche was gently melted in a pan, some butter was whisked in, then the strained chicken stock was added and whisked together. Finally some fresh oregano leaves and a chiffonade of basil was added and a little seasoning.

The pasta was boiled for about 30 seconds in lots of boiling salted water, drained and put into the sauce to absorb the flavours, some grated parmesan was mixed in, then it was coiled around a fork and placed in a bowl for serving.

Here was the finished dish:

The chef made Risotto a la Milanaise next.

He sautéed some very finely chopped onion in olive oil, then added arborio rice and cooked it to allow the rice to absorb the oil. White wine was added and reduced until the pan was dry. Then hot stock was added, a ladle at a time and the risotto simmered gently, agitating regularly and adding stock as the previous stock was absorbed, until the rice was cooked al dente. This took 15-20 minutes. A little saffron was added halfway through.

Once cooked a little grated parmesan was mixed in and to finish off, some concassé tomato was sautéed in olive oil and used to top the risotto with a few parsley sprigs: 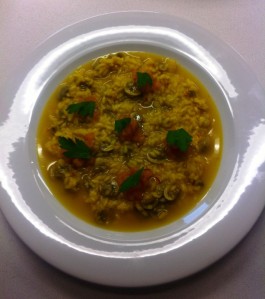 In the practical, we were very honoured to have the 1st man on the moon as our chef! Considering that was more than 40 years ago, he looks amazingly young. New to Cordon Bleu, this is obviously a change of career from NASA, now that the space shuttle has been retired.

The practical went fairly easily, with my pasta dough turning out well, though it was very easy to overcook the pasta – a few seconds could do it. It was a very tasty recipe and I’ll be making this again.

In our 2nd demonstration of the day the chef butchered a whole lamb carcass. I was hoping for starting with a live lamb and having to kill and skin it, but it was a dressed carcass already:

The chef quickly and efficiently carved up the carcass into its separate cuts using just a boning knife and a saw. Quite amazing to watch and I’d like to have a go at doing it myself. Here are the resulting parts:

Next the chef cooked a roast rack of lamb. He trimmed the fat off and cut between the bones to expose the end cleanly. All the sinew was removed and the bone trimmings chopped into small pieces. The bones were browned in some fat in a pan and some mirepoix added. The rack was browned on all sides and the bone ends wrapped in foil to prevent them burning, then placed bone side down in the pan and placed in the oven for about 15 minutes until medium rare and pink inside.

While it was cooking, a medley of courgette, aubergine, red pepper and tomato concassé was prepared.

Once cooked, the lamb was rested while the sauce was made. The bones and mirepoix were drained of oil, then returned to the pan and veal stock added and reduced until a coating consistency attained.

Here’s the chef’s competed dish. (We would be cooking this in practical a couple of days later, as the following day would be the grand opening of the new building, which looks like it’s going to skew the schedule for the rest of term.)