Today the chef made 3 dishes, 2 of which we then made in the practical.

The first was a salad Niçoise with fresh Tuna.

Next was a seafood risotto of scallops, mussels and langoustines, with the stock for the risotto flavoured with the juices from cooking the mussels and the langoustine shells. It was served with a sauce of a reduction of shellfish stock and cream.

Lastly the chef made a desert of raspberries and strawberries in a lemon sabayon, served in a tuile basket.

In the practical we made the risotto and the fruit in sabayon dishes. Both were really delicious and I would have them again happily.

Today we had the last cuisine demo of this term and chef Eric took this.

As he is the head of Basic Cuisine he answered questions about the exams next week as well as cooking 3 desserts.

He made a vanilla soufflé, which has creme patissiere as its base

A chocolate mousse, which was melted chocolate folded into italian meringue and whipped cream

And red fruits with a sabayon browned under the grill. The sabayon was made of egg yolks, sugar and white wine, whisked in a bowl over a bain marie until thick. 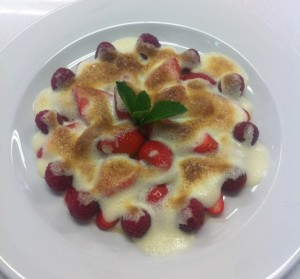 We won’t be making any of these ourselves this term as the corresponding practical to this demo is our exam next week.

The oeufs a la niege were simple enough as a recipe, the only hard bit was shaping the meringue into quenelles and poaching it.

Having tasted both desserts, I hope we never do them again as both taste like sweetened scrambled eggs, not my favourite.

Lastly we had a 3 hour class on cheese from Tom the cheese man (not actually made of cheese) which was excellent as he really showed his passion and knowledge for the subject and we tasted some pretty good cheeses. We’ll be having more lectures from him in the next 2 terms and I look forward to them.