Another day with chef John, this time 2 practicals with a demo in between.

First was cooking the sea bream with rouille and a bouillabaise jus.

Next was a demo where he cooked pan fried lobster with nicoise ratatouille and bortsch consommé.

Lastly we cooked the saddle of rabbit with tomato and anchovy stuffing.

We had a day with chef John today, which was good. He is a relaxed chef from Canada, doesn’t get flustered, will joke and mix with the students and is quite quick in the demos.

We started with a practical cooking the venison dish from yesterday’s demo.

Next we had back to back demos.

In the 1st chef John cooked sea bream with confit fennel, oven-dried tomatoes, rouille and a bouillabaise jus, topped with a croute with rouille. 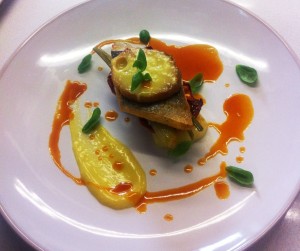 Next was a creme de menthe and chocolate chip soufflé. Terrible thing to do to chocolate is pairing it with mint. 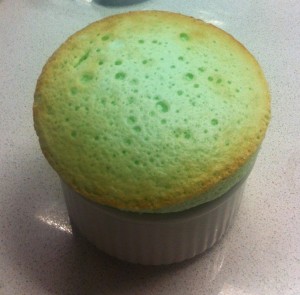 In the 2nd demo the chef made a chestnut soup with parmesan foam and truffle shavings.

Then was a saddle of rabbit with a tomato, olive and anchovy stuffing with fried baby artichokes and a microleaf salad. 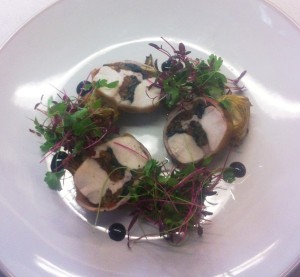 We started the day with a demo from chef John who made guacamole with sea bream marinated in lime, chilli and vodka, which he plated in 2 ways. 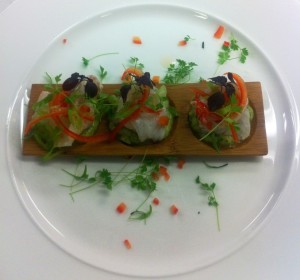 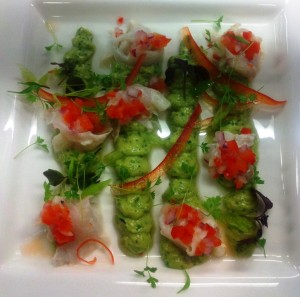 Next was a sautéed beef fillet with parsnip purée, kohlrabi slices and a marsala sauce.

Then we had a practical with chef Loic making the sole and crayfish timbale demonstrated yesterday,

followed by a technical with chef Christophe who completed the croquembouches started last week.

Today we had 2 practicals with a demo in between.

We started with cooking the lemon sole with chorizo crust demonstrated yesterday. The sauce is made from chopped small green crabs, brandy and a little cayenne and is very strong and rich. The frog’s legs garnish were breadcrumbed and fried and taste of nothing. If they were something with a wonderful flavour I could understand why we might cook them, but as they taste of nothing, I can’t see the point of spending so much time preparing and cooking something so tiny.

Next was a demo from chef Eric who cooked a couple of dishes.

The first was a soft-boiled egg, shelled and breadcrumbed in gingerbread crumbs, deep-fried in clarified butter and served with Bayonne ham and rocket with a red wine and shallot vinaigrette.

Next was a sea bream which was cooked whole in a salt crust.

The crust was opened, the fillets removed from the bones and served with avruga caviar, bok choy and chive oil.

Lastly we had another mystery basket.

We  were given a list of ingredients from which we had to create and cook a dish. I confited sea bream fillets in olive oil, made some parsley green pasta and served it with asparagus spears, broad beans, sprouting broccoli and a lime and olive oil vinaigrette with diced tomato.