Today’s demo was about stuffings for meat. But not bread based stuffings, but meat based. Chef Eric took the demo and chef Neil joined us to watch.

The 1st was chicken breast, flattened out and stuffed with a mousse of chicken thigh meat, egg white, cream and herbs. This was rolled into a sausage shape, poached and served with courgette spaghetti and a tomato butter sauce. Quite an interesting technique and it was all very tasty indeed.

Next was stuffed veal parcels. In this case the stuffing was made of minced veal, pork, pork fat, mushrooms and some breadcrumbs. This mix was spread on a veal escalope, rolled up and tied. It was browned on all sides, then braised and served with carrots sliced and cooked in a glaze.

Chef Neil again for the practical, making yesterday’s offal. We had to make the veal sweetbreads and the calves liver.

We spent about 3/4 of the time making and cooking the vegetable garnishes and the rest on the meat and sauces. Seems a bit weighted the wrong way.

The sweetbread was very soft and had to be handled carefully but had a lovely texture when cooked, though the taste was very mild.

The calves liver was also very good. Took about 1 minute per side to cook and keep it from going tough. Excellent flavour, not at all like other livers I have had.

Today was about more beef dishes with a demo and practical with chef Eric and then another demo with chef Gilles about veal.

Chef Eric started by preparing a whole beef fillet for cooking as steaks. He pulled off the chain which runs down the side of a fillet, trimmed the fat and sinew off, then cut 4 tournedos steaks for the dish he would be preparing later, leaving just the tail of the fillet. Here are all the pieces that came from the fillet: 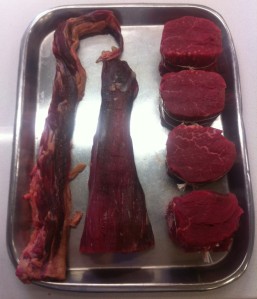 Next came completing the boeuf bourguignon he started in a previous lesson.
The beef had already been removed from the marinade and was patted dry, then browned in a pan. Then the mirepoix that was in the marinade was browned in the same pan. The marinade liquid was brought to a boil and skimmed to remove the coagulated blood. Some toasted flour and tomato purée were mixed into the beef and mirepoix, the pan was deglazed with the wine marinade, stock was added and the pan was put in the oven to cook through.

While the meat was cooking the garnishes were prepared. Baby onions were cooked and glazed brown, mushrooms and some bacon lardons were sautéed until golden and some heart shaped bread slices were sautéed in clarified butter. Turned potatoes were steamed.

Once the meat was cooked, the sauce was finished with some red wine reduced to a glaze, then the meat and garnishes were plated: 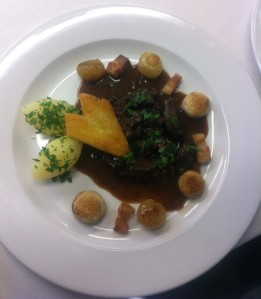 Next the chef prepared a peppered steak with darphin potatoes.

Each piece of fillet steak was tied loosely to hold its shape.

The potato was prepared next. Julienned though a mandolin, salted to remove moisture, the potato was cooked in a ring in a frying pan with a little clarified butter, then into the oven to cook until golden.

The steaks were seasoned, crushed black peppercorns pressed into them, then cooked in clarified butter, browning on all sides. The chef cooked 4 steaks to demonstrate blue, rare, medium and well done steaks. The 1st 2 were cooked in the pan, then the pan was put in the oven to continue cooking the other two.

Once all were cooked, they were rested while shallot was sautéed until in the pan, then deglazed with cognac, stock added and reduced by 80%. Then some cream and crushed green peppercorns were added to the sauce.

Finally the steaks were reheated in a pan with foaming butter being spooned over them, before being plated with the potato and the sauce:

In the practical we made the roast beef and vegetables the chef demonstrated last week.

It went ok except that the piece of meat we were given was just a steak, rather than a piece of beef for roasting. This meant that it was hard to brown and roast without overcooking and it wasn’t as rare as I would have liked. My turned potatoes for roasting still need some work on the turning and the turned artichoke was a lot of work for a bland and uninteresting vegetable and not one I would relish doing again. The beef and sauce tasted pretty good though and was a lovely dinner for my wife and I.

Chef Gilles took us for the last lesson of the day – a demo on veal.

He started with a blanquette de veau which is a white veal stew. Cubed stewing veal was covered in cold water and brought to a simmer to release scum, then drained and returned to the pan with mirepoix, bouquet garni, garlic and mushroom trimmings. It was brought to the boil again, skimmed and simmered with the lid on.

Baby onions were cooked blanc and mushrooms were cooked with water, butter and lemon until cooked through. A rice pilaf was prepared by sautéeing onion in butter, the rice was added, then hot chicken stock, a cartouche put on top, then cooked in the oven for 20 minutes until the rice was cooked and the liquid all evaporated. It was finished with a little butter.

The sauce for the veal was thickened with a roux and then finished with a liaison of cream and egg yolk and all was arranged on a plate:

Lastly the chef made a veal escalope with lemon. A slice of veal was trimmed then flattened by beating between sheets of cling film.

Black olives were diced and a lemon was segmented and the juice retained.

The veal was dusted with seasoned flour and fried sautéed quickly in butter. The sauce was made from nut brown butter, lemon juice, veal stock, lemon segments and the diced olives, reduced together and finished with a little parsley: 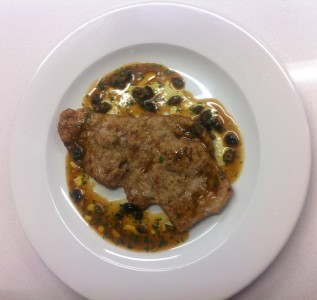